“Aside from being sexy what do you do for a living” is not flirting.

Well… I mean it is, it’s just not how successful men do it.

Pick-up lines are what fragile men use when they’re too insecure and socially inept to court the right way.

So what is “the right way?”

Learn How To Flirt The Right Way With emlovz

To find out, let’s hear from women themselves on how to flirt with a woman.

However, we haven’t consulted with just any single female.

Instead, we asked three female dating coaches about how best to use non-verbal cues and implicit gestures to flirt with women.

This is what they had to say.

How To Flirt With A Woman

First up is Jackie.

Jackie is both a matchmaker and a dating coach at emlovz.

When I asked her a guy should flirt with a woman she gave me a litany of both non-verbal and verbal ways that can be used to make your interest known.

— Non-sexual touching of arm or leg

— Leaning in when talking

— Staying off the phone during the date

— Showing up on time

— Walking her to her car

— Walking on the street side of the sidewalk

— Calling a rideshare, so that she makes it home safe

— Asking questions that make it obvious that he would like to get to know her (about friends, family, goals)

— Asking her on another date at the end of the date

— Some of you might have been puzzled to read the words, non-sexual touching.

So what is that exactly and what are some examples?

Ya see, touch is a great way to get increase dopamine and oxytocin levels. The thing is, one misguided touch could ruin your hopes of ever landing a second or third date. That’s why your touches must be timed perfectly and well-intentioned.

Here are a few ways to touch her without creeping her out:

— Ask her for arm so you can examine a tattoo

— Guide her through a door entrance

Initiating contact is a great way to signal interest. However, make sure that contact isn’t always one-sided. Be on your toes and aware of any attempt she might make to touch you. If you’d like to invite her touch you can always point out a certain body part of yours that is of interest.

No, I’m not suggesting you rip off your shirt and show her your six-pack.

Rather, bring your arm forward and talk about your tattoo, where you broke your hand, or your calves that are killing you from working out yesterday.

By bringing your body to the forefront of the conversation you’re giving her an opportunity to touch you without it being weird. If she takes the bait you should interpret this as a signal that she’s feeling you.

But hey, if some of these strategies sound dubious I don’t blame you for questioning them. We’re just a bunch of seasoned dating coaches & matchmakers with hundreds of happy partnerships to show for our work.

What do we know?

Look I get that maybe you’d like a little science to back up our claims. That’s cool. Here’s what the science has to say about flirting with women.

How To Flirt With A Woman According To Science

When it comes to providing dating advice, these experts aren’t just recycling flirting tips and tricks they learned from the last rom-com they watched. Rather, our strategies are back by the most effective dating coach of all — science.

Gazing into another’s eyes for two minutes has been proven to increase feelings of attraction, proving that in order to find love, you must look for it.

But bad puns aside sustained eye contact is an easy way to quickly build rapport. We recommend the 70-30 rule. Maintain eye contact for 70% of the date whereas 30% of the time your gaze is averted.

These findings shouldn’t come as a surprise.

Remember that vial NYT article claiming that after 36 super revealing questions you can fall in love with anyone? 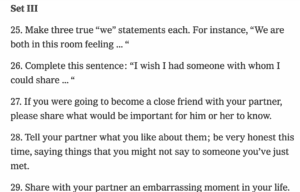 Well, the article advises ending the experience by staring into your date/newfound lover’s eyes for 4 minutes.

However, staring into the depths of someone else’s soul isn’t the only way to win their affection.

Jackie’s claim of non-sexual touching of the arm and leg is also backed by science. However, not any touch will do.

The most flirty type of touch that’s bound to increase attraction is a light touch on the shoulder.

To find these results researchers had a confederate ask for the phone number of strangers. The confederate would ask women after touching them on the shoulder for 1-2 seconds or would bypass the touch and go straight for the number.

Researchers found that the women touched on the shoulder were drastically more likely to a give the confederate their number than women that went untouched.

There are a ton of non-verbal cues men can use to court with women that are backed by science. 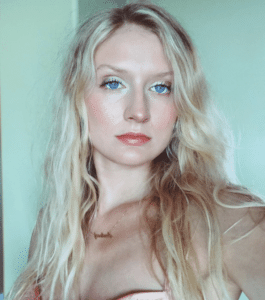 “I think the best way for a guy to show he is interested in a woman without explicitly telling her is by remembering little things about her life and asking her about those things later on. Perhaps he remembers she has a big meeting during the week and asks her about it when he sees her.

Another effective way to show interest is by being playful and poking fun at the girl. I think when a guy is paying enough attention to a girl to the point of trying to make her laugh, his efforts do not go unnoticed.

Non-verbal signs could be looking her directly in the eye and smiling at her which seem obvious, but not enough guys do that. Complimenting an outfit or shoes is a sweet way to show a girl you are interested in something about her.”

There’s one big takeaway from Audrey’s comments that she expresses in a few different ways.

As if it wasn’t obvious before let me put it in bold.

Pay attention to the words coming out of her mouth.

To emphasize the point just a little bit more here’s a meme: 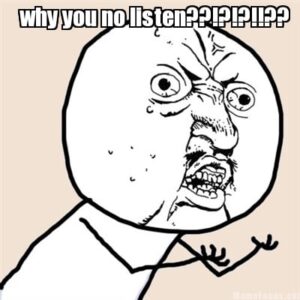 The beauty of such advice is that it’s simple and easy to implement.

What’s sad is that as Audrey says, too few men pay attention to their dates.

They’re too preoccupied with their phones, food, plans for later, or the next Tinder date to give them their full and undivided attention.

Being another human’s sole focus is freakin’ sexy.

We all want to feel as though the world revolves around us. Giving that sensation to a woman will make her swoon.

Audrey’s advice also echoes that of Daniel Carnegie’s, the author of How To Win Friends And Influence People.

On listening, he had this to say:

“But I had done this: I had listened intently. I had listened because I was genuinely interested. And he felt it. Naturally, that pleased him. That kind of listening is one of the highest compliments we can pay anyone. ”

Listening can only ever have positive consequences.

But to take your relationship to the next level, you can’t just listen.

According to Emyli, the co-founder of emlovz, sometimes you just need to tell her like it is.

“Invite her on a date using a TDL. Smile and make eye contact. Invite her to join you and your friends at social events.

But at the end of the day, I think being direct is the way to go because it leaves nothing to the imagination, shows you’re courageous and go after what you want without hesitation or fear of rejection.”

If you go too fast or too slow you’ll fall.

Flirting is all about progressing towards an ultimate goal while enjoying the journey.

Using subtle non-verbals is well and good, but if you’re not making your intentions clear she’ll lose interest.

At some point you’re just going to have to be direct.

That directness can manifest itself in many ways.

Hey Jen, are you up for a salsa lesson at 7 o’clock this Thursday at Filipe’s?

You might use a TDL to ask her out, tell her that you’re really into her at the end of the date and ask to see her again, you can talk about future plans together, or tell her you next met anyone as “x” as her.

And of course, you can always give her a smooch.

A massive 2017 Match study found that 75% of singles are turned off when their date answered their phone on a date.

Those numbers don’t decline much when it comes to texting with 66% of respondents saying that they are turned off by a text.

Match’s 2016 study also found that behind checking one’s phone, overtly trying to impress your date were female respondents’ second biggest turn-off coming in as a turn-off for 41% of women surveyed.

The last major finding revealed by Match’s yearly study was that women aren’t into hearing about a date’s finances. That’s great if you have a lot of money, but you don’t need to go on and on about it. 34% of women said this was actually their biggest pet peeve. Instead of bragging, why not flex by being a gentleman and ordering her an Uber home.

Look flirting can be difficult.

That’s why our team of dating coaches and matchmakers are here to help.

Book a 1-on-1 Zoom call with us to learn how we can help turn you into a dating pro.

Signing up for one of our coaching programs means learning how to flirt IRL, online, how to set up awesome first date, how to accelerate a romantic relationship, and much more.

For the guys who are simply too busy for coaching, we offer full service matchmaking programs guaranteed to introduce you to your most compatible matches.

The post How To Flirt With A Woman [As Told By 3 Female Dating Coaches] appeared first on emlovz.